A Touch of Destiny (GenellaDeGrey) 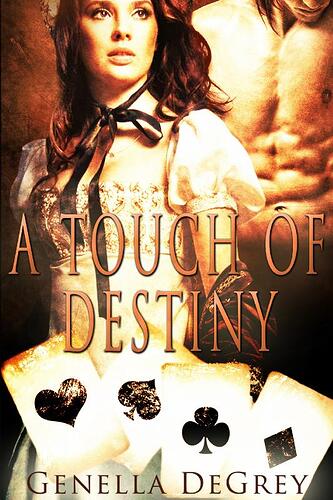 In the American Wild West in the summer of 1880, a widow gets another chance at love with a handsome young wanderer.

Originally from an East Coast society family, newly widowed Beatrice Gaitland is doing her best to carry on with dignity and continue her ministry to the less fortunate in the rugged mining camp of Tombstone in the Arizona Territory. However, survival will be difficult due to the fact that her late husband, Pastor Lindley Gaitland, has left all of their earthly possessions to his brother, Allen.

Handsome Luke Hughson, who rejected taking over his family’s Virginia plantation in favour of a more pleasant career as a gambler, has been accused of a murder he didn’t commit. Luke finds himself in Tombstone, falling for a widow whom he finds hauntingly familiar and tempting beyond words.

Allen Gaitland, who has lived in the shadow of his older brother all his life, moves to Tombstone to take over Lindley’s ministry at the Shepherd of the Hills Church meeting tent. Allen is determined to win over the town and, moreover, his brother’s widow.

Sensing he is too much like his abusive late brother, Beatrice does her best to decline Allen’s advances, while another man gets under her skin like no one else ever has. She can’t help but long for the sensual touch of young Luke, whom she has just met.

Of course, it doesn’t help matters that Luke flirts with her mercilessly and leaves her smouldering for him.