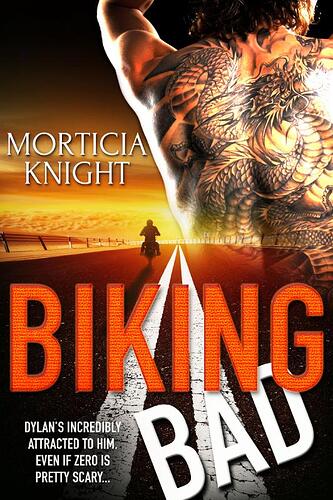 When Dylan, a young wannabe investigator, stumbles into the Mojave Sidewinder’s MC bar, he finds all kinds of trouble—especially in biker Luc ‘Zero’ Villarojas.

The Mojave Sidewinders is the largest gay MC club in Southern California. They’re also one-percenters, which makes them alluring to those looking for trouble and a danger to those making it. Luc ‘Zero’ Villarojas has been a brother ever since the club’s prez took him in as a runaway. At thirty-four years of age, he’s content to ride his hog, chase tail and run his tattoo and piercing parlor, Zero to Sixty.

Dylan has had to take care of himself since his aunt died when he was still a teen. Even though he’s barely twenty-two years old, the small spitfire has made his way in the world as best as he can and has even started his own would-be investigative agency. He’s proud of himself, even if his agency is on the edge of town in a ramshackle building.

Working his first big case involving a missing young man, Dylan barges into Road Rage, the Mojave Sidewinder’s exclusive bar, and starts asking questions. When it looks as though he’s about to get beaten up, a large, muscled biker covered in ink comes to his aid. Dylan’s incredibly attracted to him—even if Zero is pretty scary and Dylan’s still a virgin. But is there something Zero knows about the missing man that he’s hiding? And is Dylan in more danger than he realizes?