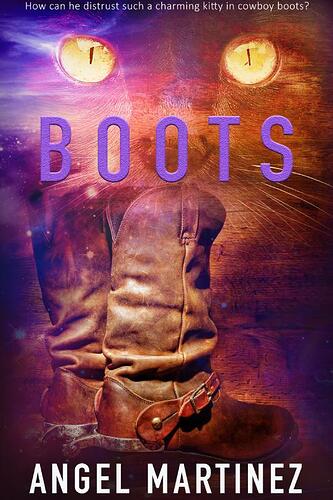 Willem’s lost his job and his boyfriend, and now possibly his mind when his cat calls him a nitwit.

Willem’s father never approved of his artistic talents, his choices in life, or the fact that he’s gay. When the only thing Horst leaves to Willem is the family cat, he thinks it’s his father’s last insult from the grave. That is, until the cat starts talking to him.

Though Willem’s lost his boyfriend, his home, and his job, Kasha, who claims to be a magic cat, reassures him that all will be well. All he needs is Willem’s trust and a good pair of boots. But giving boots to a talking cat has unexpected consequences when odd events ambush Willem at every turn, such as the appearance of a handsome stranger in his arms at night. While he begins to suspect Kasha’s plans might be dangerous for all involved, how can he distrust such a charming kitty in cowboy boots?