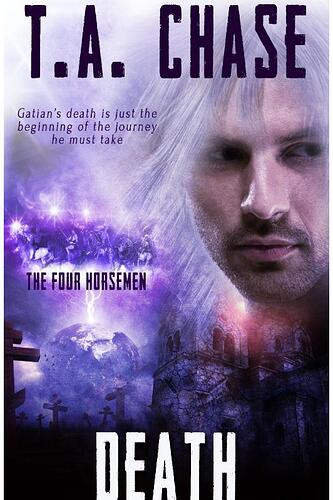 Death, the Pale Rider and the most feared member of the Four Horsemen, has been searching through the centuries for a soul to save him from his solitary life.

In the 1700s, Gatian Almasia was rich and a sought-after member of Parisian society. No one realized he’d lost his reason for living three years earlier. When his sister accuses another nobleman of raping her, Gatian does what any older brother would do. He challenges the man to a duel, and kills him. Later that night, the dead man’s family takes their revenge on Gatian.

Gatian’s death is just the beginning of the journey he must take as Death, the Pale Horseman of Apocalyptic fame. While he doesn’t regret taking the nobleman’s life, the guilt of not being there when his lover died builds a wall around his heart, and until he accepts forgiveness, he must always be Death.

Pierre Fortsecue is a spoiled rich young man whose heart is broken by the man he thinks he loves. Finding himself alone in Paris, Pierre sinks into a haze of heroin. He gets a tainted baggie of the drug, and almost dies from it. Death arrives to take his soul, and something about Pierre touches the Pale Horseman, who steals him away to help him heal.

As Pierre heals and Death begins to feel again, they begin to wonder if love really is the only emotion needed to overcome desolation and destruction.