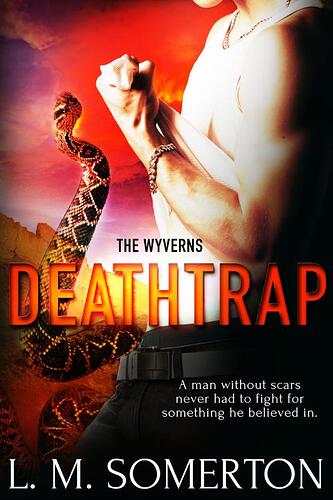 A man without scars never had to fight for something he believed in. A new relationship takes time and effort. A new relationship with Orlando de la Pena takes a whole lot more. As a Dom, Rogue knows what he wants, but Orlando refuses to fit neatly into the box labeled ‘submissive’. He’s feisty, demanding and far too pretty for his own good.Orlando loves Rogue and he’s learning to love The Wyverns, but he hates being stuck out in the desert. Finding a niche in the world of bikes and fierce warriors is difficult, and Orlando’s impatience gets the better of him. He walks out into the desert and runs in to an antisocial diamondback. Rogue has more than one problem to deal with. The Longhorns MC issues a challenge for territory. The Bellazi cartel is out for Wyvern blood. The Wyverns are under siege, and Rogue has to work out how to save not just Orlando, but all of them.