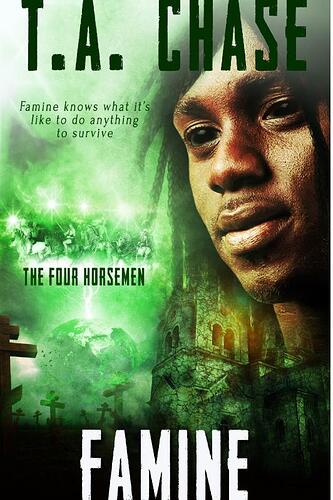 Saving a dying man might be just what Famine, the Black Horseman, needs to feed his starving heart.

Having been sacrificed by his village shaman, Famine knows what it’s like to do anything to survive. He wanders the world, sowing drought and starvation in his wake. Yet he hates being the Black Horseman more than anything in the world, except the man who ended his life all those centuries ago. Famine never stops doing his job, and never allows himself to fall in love.

Ekundayo wants a better life for himself, so he steals a diamond from the mine where he works. Nothing goes well for him after that, and he finds himself dying in the desert on his way to the border. When he’s rescued by Famine, Ekundayo isn’t sure if his luck has changed or not. The longer he stays in Famine’s company, the more Ekundayo discovers he just might be falling in love with Famine.

One bad choice on Ekundayo’s part and a future together seems out of reach. Will Famine let his only possibility of love go or will he defy Death himself to keep Ekundayo?