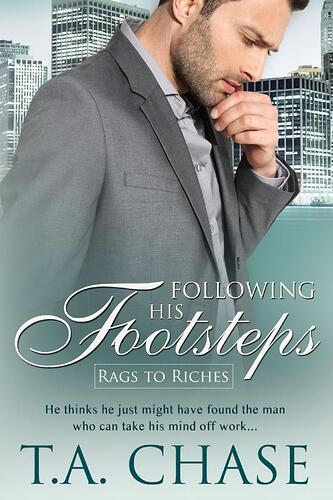 Being just like his father is what scares Winston the most.

Winston Tennant came to New York to work. After burying himself in his job for the several years, he’s afraid he’s becoming like his father. Cold and indifferent, Winston’s father only wanted his son as a way to continue the family line. When Winston came out, he was disowned. His best friends do their best to keep him from his father’s fate. And when Winston meets Patrick Gaverson, he thinks he just might have found the man who can take his mind off his work.

Patrick Gaverson never imagined that Winston Tennant, head of the London office of Bellamy International, would be interested in a mere personal assistant like him. Yet after a not so subtle set-up by his boss and his best friend, Patrick finds himself on a date with Winston. He discovers that Winston is a lot more down to earth than Patrick thought.

Falling in love so quickly shouldn’t be easy, but Patrick’s willing to take a chance that it will last more than a week.