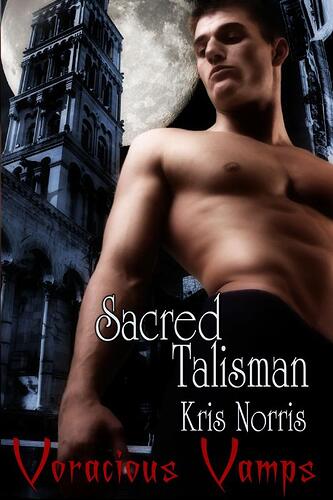 After roaming the earth for five hundred years, Rafe’s life is about to begin. Rafe isn’t your ordinary vampire. He’s an enforcer-a vampire created for the sole purpose of guarding a sacred talisman and preventing its power from being unleashed on the world. There’s just one problem. He has absolutely no idea how to find it.

The last thing Terryn expected was to have a handsome stranger come to her rescue when some creep drags her into an alley on Halloween. With blonde hair, blue eyes and a body rivalling every wet dream she’s ever imagined, she can’t help but wish her hero would keep her pinned to the wall. Too bad she doesn’t do one-night stands. But when the guy claims her necklace is an ancient talisman, and it’s his job to protect it, she’s launched into a world of prophecies and vampires, and discovers sex with the undead is hotter than her wildest dreams.

Now if they can only survive the night and prevent a hoard of rogue vampires from claiming the pendant’s power, life-or even death—might just get interesting.