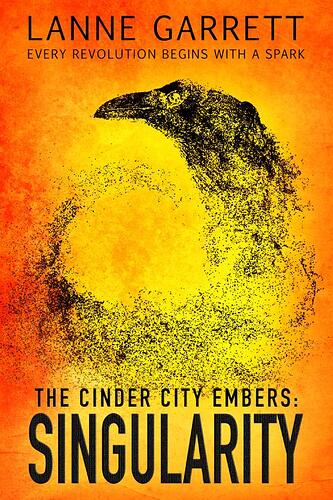 Every revolution begins with a spark.

In a world torn apart by war, one nation remains standing—Cinder City. It is surrounded by three state rings—Fringe, Boundary and Limits—and run by the Authority, President Atlas Gold, the tyrannical leader of the golden city. The population is divided into two groups, the rich and the poor, the Solvents and the Insolvents, and controlled under the threat of being named an Ember—a death sentence.

Each year, Cinder officials open their Golden Gates and hold the Ember Harvest of all eighteen-year-olds. The Harvest is a test of the potential Embers. It is said that over three hundred years ago, the Insolvents had grown tired of their treatment and had mastered innate abilities to help them wage war against Cinder City. Now, as a precaution, every child is tested for the Scoria Singularity, remnants of the genetics from a time the world had been almost destroyed overnight, for the Authority would never risk another war. He would remove the sparks—the Embers—before they started another revolution.

For Ezra, an Irish Chippewa—the last of the Chippewa people and recently named a potential Ember sent to Ember Gates—survival is in her blood. As the Ember Gates transforms her and the others, Ezra must determine who her real allies are, what parts of herself she is willing to sacrifice and where her newfound love fits into the cruel world of Ember Gates.

Ezra will be pushed to the limits, having to decide between her humanity and staying.