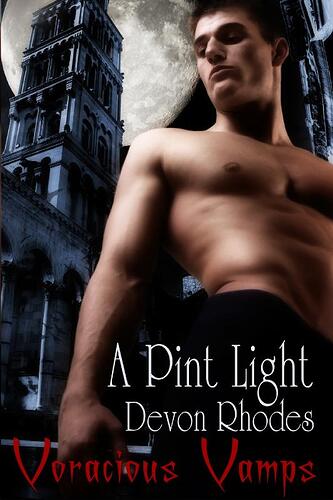 What’s a vampire to do when every day is the same old dull quest for blood? Head to Maui, of course. But before Valerian can hit the beach, he needs to get rid of the sultry mage seducing him in his sleep. She may have fooled his subconscious, but he doesn’t need a mate complicating his life. Imagine Val’s shock when he finds out she’s a he, yet still has the power to arouse him beyond anything he’d ever imagined.

Raine faints at the sight of blood and isn’t looking forward to being a vamp’s chew toy. Still, family duty calls, and Valerian turns out to be the hottest, and most powerful, male on two legs. Raine is crushed when the sexy vamp of his dreams runs from their rough play in horror. But his pride can’t stand in the way when Valerian accidently steals his magic along with his blood.

Now, with time running out, Raine needs to seduce him one last time to even up the score, and maybe this time, they’ll exchange more than blood and power. Magic is in the air, and sometimes love only needs a little nudge.