A Talent for Trouble (LandraGraf) 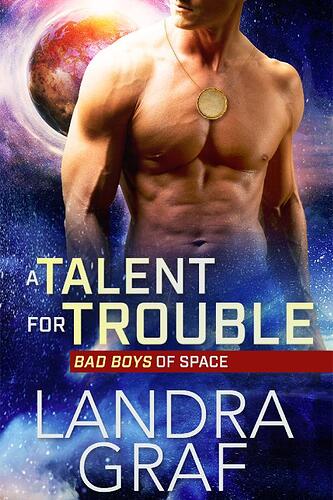 When notorious drug runner Emilio Morales meets desperate bootlegger Antonia Smith, they both discover contraband isn’t the only thing worth breaking the law for…

Drug runner Emilio Morales is one deal away from being the sole runner from Earth to the upper planets—until his partner attempts a double cross. Now, Emilio’s stuck in a disabled spaceship with an unpredictable, attractive female who’s willing to help him out if he’ll assist her in retrieving her ship from an impound facility.

Antonia ‘Toni’ Smith is sick and tired of being beholden to men. The only way to guarantee freedom is to get back her bootlegging ship to run her own business again. When Emilio kills her ticket out, she’s forced to rely on him for assistance. Emilio, the most wanted and annoying man in the solar system, is a sexy-as-hell means to an end.

But every plan the duo make falls apart and each day they spend in each other’s company increases the tension between them. When Emilio’s drug deal collapses, the boss in charge demands retribution and the pair finds themselves facing something neither of them wants, including dealing with their emotions for each other.

With the death toll and their defences low, can Emilio and Toni get the happy ending they want, without falling for each other in the process?