A Touch of Frost (LAKennedy) 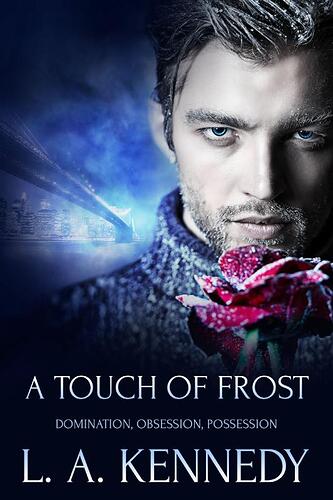 Domination, obsession, possession—where the all-powerful Frost comes toe to toe with Juliet Sinclair, a submissive to no one, until her first touch of Frost.

After a chancy one-night stand, Juliet Sinclair runs into Mr. Tall-Dark-Handsome, the only man to make her contemplate true submission—Roman Frost, CEO of Frost Industries, alpha billionaire playboy and her new boss. There is no question that the chemistry between Frost and Jules is sinfully alluring, but being together will risk everything they both have fought so hard to build.

Frost, a controlling megalomaniac, can’t get enough of the only woman who has said ‘no’ to him. Jules, a hopeless romantic, wants to be consumed by love until she stands too close to the fire of Frost. The two of them together are chaos, but the two of them apart are emotional mayhem.

Fighting their own inner demons, they launch themselves into the all-consuming cat-and-mouse game of love. Yearning for something more, Jules willingly steps into the belly of the beast, driven by a touch of Frost.