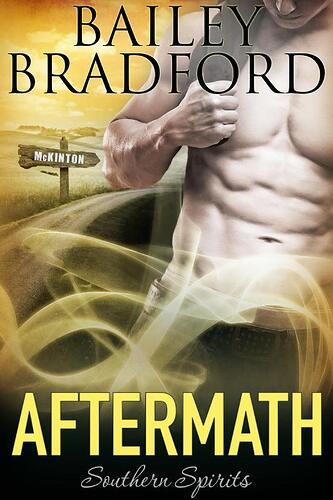 Darren Brown spent two years running from his past, but he could only run so far before he was found. Darren Brown lost the only two people he loved just days apart. His mother first, then his best friend. Guilt over his friend’s death drives Darren to wander for over a year before he winds up in the town of McKinton, Texas.Lee Bausch served his tour in the Army then started his quest to find answers only one person could give him—except that one person had moved away. It takes him almost two years to find Darren Brown, and it turns out Darren doesn’t have the answers Lee needs—he is what Lee needs. Darren is shy and so sexy Lee can’t get enough of him, but he still needs answers because he can’t shake the feeling someone he loved was murdered. After a terrifying experience at the motel, Darren knows he has to tell Lee about the spirits in McKinton. And there’s one spirit, scared and alone, who has the answers Lee seeks, if only the spirit knew how to tell Lee his suspicions are right.