An Opportunity for Redemption (DonnaGallagher) 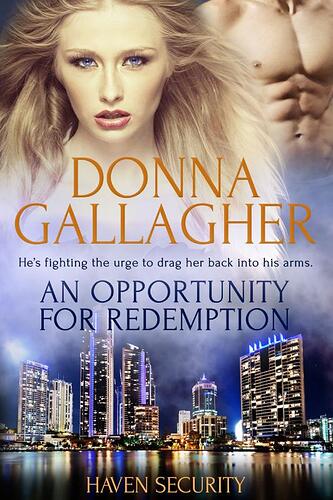 She kept his son a secret for years—she should pay for her deceit. Instead, he’s fighting the urge to drag her back into his arms—and bed.

When ex-commando—and now owner of Haven Security—Nathan Haven discovers he has a son, it’s enough of a kick to the gut. Learning at the same time that this child he’s never met is losing the battle with leukemia—the last straw. He vows to make Rebecca Hammerton regret her decision to keep his son a secret from him. But first he is going to do everything in his power to help defeat the disease that threatens his boy’s life. Then he will deal with the woman that walked away from him seven years ago without so much as a by your leave, turning his heart to stone.

He just has to suppress the constant urge to drag the damn sexy heartbreaker back into his arms—and his bed—first.