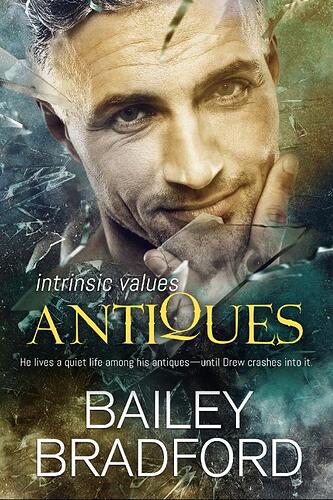 Elliot Douglas lived his life on the sidelines—until Drew Harrington smashed front and center into it…Since rebuilding his life, Elliot Douglas has led a quiet existence, hiding behind a routine and the old-fashioned clothes and behavior that make him seem older than his early forties. Now he’s taking one step at a time toward creating a more fulfilling life…one in which his sexual needs to submit are met.However, baby steps are left behind when he meets Detective Andrew Harrington.A driven—some say obsessed—Scotland Yard detective, Drew lives by compartmentalizing, focusing on his work and, as a Dom, enjoying BDSM sex as a stress relief. On the track of stolen paintings, he’s traced them to San Antonio, where he’s distracted from the case by an infuriatingly handsome antiques trader who’s not as predictable or fuddy-duddy as he wants the world to think. Intrigued, Drew’s drawn to that mystery as much as the one he’s there to solve, which blindsides him.Elliot and Drew’s attraction is instant, and their feelings strong, especially when Drew poses as Elliot’s boyfriend to infiltrate the local antiques scene. But nothing is what it seems—not the case, not Drew…and not even Elliot. With deception all around them, what hope do two men unused to trust and commitment have of a relationship?