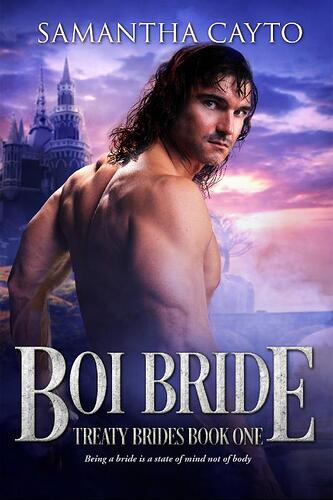 Being a bride is a state of mind, not of body.

The Kingdom of Moorcondia and the Marshlands have been warring for years. Now a treaty has been negotiated, but it needs to be sealed by a marriage between the ruling families. But the bride has bolted, leaving her brother, Taryn, to fill the role. There is nothing in the law of either country that says a bride has to be female.

Forced to dress in his sister’s gown and marry Soren, Taryn faces his fate with anger, resolve and frightening anticipation. While the Moorcondians are flexible in their sexuality, the Marshers are more prudish, plus Taryn has learned the hard lesson that an attraction to men is unnatural and wrong. His desire for Soren frightens him.

As a prince, Soren knows his duty and executes it without hesitation. As a widower, he looks forward to a new marriage, and his unexpected bride is very fetching. If only he can convince Taryn to put aside his fears and accept the pleasures of the marriage bed.

Taryn struggles to fill the role of a wife in the royal family, even as everyone else tries to adjust to the notion of a male bride. As the days pass, Soren comes to appreciate his bride more, and Taryn tries embrace his new role with enthusiasm instead of resignation. But politics is a treacherous place to navigate, putting their blossoming love in jeopardy.