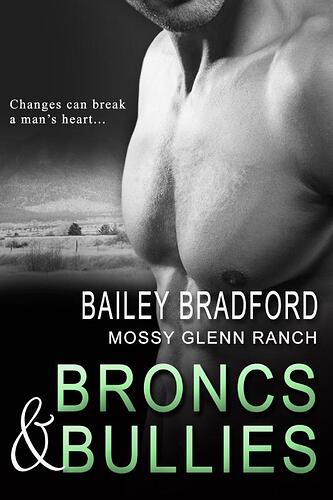 Frankie never let anyone close, until Duke refused to give up on him. Frankie Freemont knows everyone at the Mossy Glenn thinks he’s a jerk for breaking things off with Jody. Letting people get close to him just isn’t something Frankie does. And older men? No way. Frankie doesn’t do that daddy thing so many younger guys seem to like.Which is why he can’t understand his reaction to Duke Edmonds. Duke has always made him nervous for no reason Frankie can figure out.Duke suffers a concussion, and Frankie suffers the consequences of a bad choice he makes. With his family wanting him for only one thing—money—and Duke slowly breaking down his defenses, Frankie doesn’t know which way is up. Duke is determined to prove to Frankie that he’s a good man—they both are. Duke’s worked hard to overcome his youthful past. He’s still ashamed of being a bully years ago, and does everything he can to make sure he never makes mistakes like that again. Being a better man is hard at times, but Duke’s spent his whole adult life doing so.Now he and Frankie have to decide what they want, and how to go about getting it. That means making some changes that can break each man’s heart.