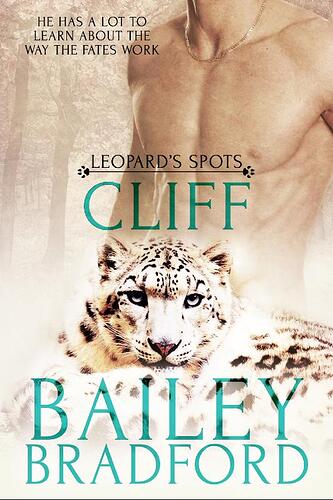 Cliff thinks he’s too tough for love and too mean for a mate, but he has a lot to learn about the way the Fates work. Cliff doesn’t know who his parents were—he was created in an in vitro lab run by shifters with devious plans. He’s found out a few things, but nothing prepares him for the changes coming his way when he decides to break into the clinic to search for information. What should have been a simple break-in turns into a rescue from hell and two dead shifters. To top it off, the clinic catches on fire and Cliff loses all chance of finding anything there.But the Fates are fickle, and Cliff is one of their favourite shifters to screw around with. He’s snarky, and mean, and smart, which oddly enough endears him to them.Not that he’d believe it when they send him a mate. Cliff doesn’t want a mate. And he sure doesn’t want the magnificent and powerful man he’s destined to be with. That’s what he keeps telling himself, and maybe he’ll eventually believe it.When he’s promised the opportunity to break the mate bond if he really wants it, that sounds like a deal. So why doesn’t he jump on it? He doesn’t know, and both he and his mate might not survive long enough to figure out what it is Cliff really wants. Hunted and hunter, he and his mate are both.