Every time a player comes to the end of an episode, the app will take them to the results page, where they are always given the option to continue to the next episode and view any comments made on that story. There are a few more things you can add to your results page to give your reader a more game-like experience.

A Score keeps track of variables given during gameplay. 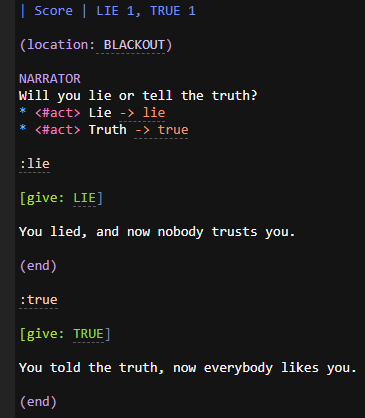 (Note: (location: BLACKOUT) is not needed.)

All you need for a Score is the header, and you need to give the player some variables during the episode:

First is Score, which cannot be customized, then the variables (in all caps) that you are giving in the episode that you want the player to collect, followed by a number, which should be the maximum amount of that variable that the player can get within that episode. The variables are separated by commas.

In the example above, the player can only get one LIE or one TRUE variable.

(Note: There is a bug in the TC where it doesn’t show your actual score on the results page, but it does show up correctly on the app. Hopefully that’ll get fixed too, and I’ll be able to put up an accurate picture.)

This is how the score is displayed on the results page. In this example, the player chose to lie. The variable name is shown, the percentage of players that received that same score, and on the far right is the actual score, 1 out of 1, or 1/1. True has 0/1, because the player did not collect that variable. (Sorry again that the picture is not accurate.)

So, score amounts should be customized for each episode. Another example is if in episode 1 the player collects 1 LIE, and in episode 2 can collect 3 LIE, the score would look like this:

Generally, you should not have a score for every variable you give to your player. Just the ones that are important to the story, that the player can collect throughout gameplay, or that you want the player to know about.

You can have a score for as many variables as you like, they will all show up on the results page as far as I know.

That’s all for the Score guide, if you have any questions or comments, feel free to post below!