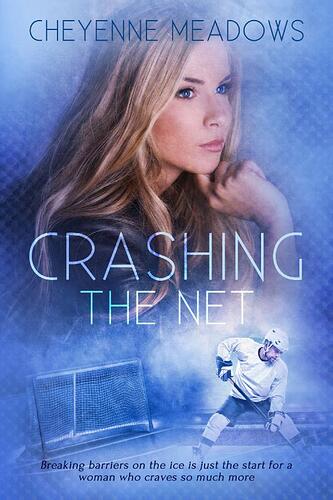 Breaking barriers on the ice is just the start for a woman who craves so much more.

Ranger Deacon can’t believe his team’s bad luck. First their season falls into a steep slump, then their number one goalie goes down with a knee injury. Morale is in the pits and the coach springs one outrageous development on them—a woman will be joining the team to finish out the remainder of the games. He’s skeptical until he sees her play and loses a piece of his jaded heart in the process.

Piper Darrow is a hockey prodigy, a goalie at the top of her game in the women’s league. She’s just finished a stellar year when the opportunity of a lifetime presents itself—becoming the first woman to play in the men’s professional league. Plenty of obstacles stand in Piper’s way, including acceptance from the fans, the players and even her own teammates. That, along with some hard hits from opponents, she can handle. It’s the fierce desire she feels for Ranger that throws her for a loop.

Playing a male-dominated sport is difficult enough without the additional challenge of falling for the captain of the team. Piper knows the score, is determined to get the job done, but can’t help but wonder if there’s more to Ranger than excellence on the ice.