Diary of a Mad Escort (CatherineChernow) 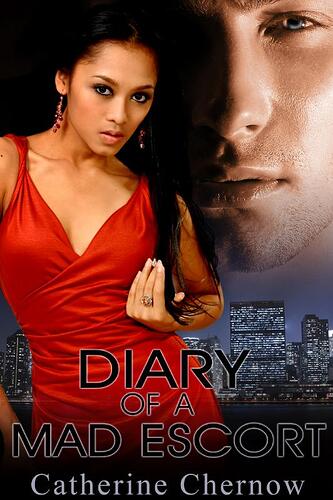 Grace Barry leads a double life. By day, she’s a smart, savvy financial consultant. By night…a sultry, seductive, paid escort providing fantasy sex to New York City’s wealthiest financiers. Grace, a.k.a., Ginger, arrives at her clients’ hotel rooms in her office clothes, looking like one of their own, but tucked away in her handbag are her sheepskin lined handcuffs and little whips.

One evening’s sojourn to wealthy stockbroker Mark Chase’s hotel room changes Grace’s life forever. She slips her card key into the door…and discovers Mark’s dead body sprawled on the floor. Fear makes her run, straight into the arms of FBI agent Alex Winter—a man with a deadly secret…a man whose heart is as cold as ice. Now, Ginger must raise money for her defence. In a bold move, she offers her private diary for sale to any news channel willing to pay.

Alex Winters’ frozen heart matches his ice-blue eyes…and his name. His fellow agents call him ‘Iceman’ and he has no patience for beautiful, scheming murderers like Ginger Berry. She’s the #1 suspect in the death of wealthy financier Mark Chase, but Alex’s fascination and attraction to the scheming call girl gets in the way of his investigation. As Alex unlocks the secrets surrounding Mark Chase’s death, he unwittingly places Ginger in danger. When her life is threatened, it will be up to Alex to protect her, and keep her from publishing her diary of a mad escort.