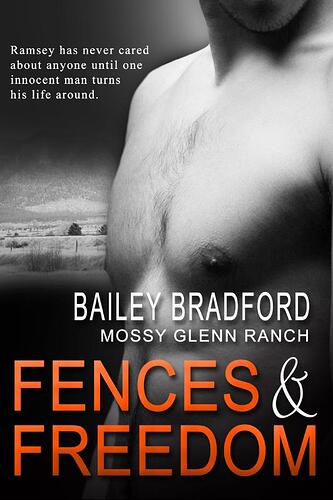 Ramsey Carmichael has never cared about anyone or anything except writing the next story, until one innocent man turns his life around. Barney Rader can’t shake the label he’s always carried—that of the town’s poor kid. It’s been him and his mom ever since his dad died years ago. He’s struggling to make a living and bring home enough money to keep him and his mom going. After months of trying, Barney gets hired at the Mossy Glenn Ranch, and the first thing he learns is that he wants Ramsey Carmichael. Bad. Ramsey Carmichael has fucked more men than he can remember, and Barney is one tempting piece of ass. But while Barney might be naive, he isn’t stupid. Before Ramsey knows what hits him, he’s tangled up with Barney—and re-examining his life. Ramsey doesn’t like what he discovers, but turning his life around is a lot easier said than done.