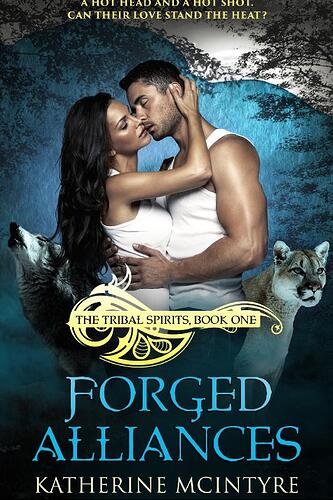 Sierra and Dax’s alliance is already rocky. He’s a cocky wiseass, and she doesn’t put up with bullshit. So, when a mating bond appears between them, it threatens to send them both running.

Sierra Kanoska fought hard for her position as wolf alpha of the Red Rock pack, and intruders in her territory receive the full brunt of what her claws, fangs and smarts can accomplish. So, when Dax Williams, de facto alpha of the Silver Springs pack, pays an unwelcome visit, Sierra’s ready to toss him out. However, the pack elders sabotaged Dax’s fight for alpha against his brother, driving him from his lands. Sierra hates underhanded crap like that, so she agrees on an alliance.

As they work together, she witnesses an alpha who wants to do right by his pack, not just a cocky wiseass. Their growing attraction blazes hot, but the moment she and Dax lock lips, a mating bond emerges. Sierra sure as hell isn’t ready to share that intimate connection with a stranger and the thought of forever sends Dax running.

Before they can talk, the Tribe commanding the East Coast shifters arrives to settle the dispute. Dax and his brother’s punishment for their pack’s civil war is a free-for-all on their lands. Not only does he have to defeat his brother, but any challenger in the region. Despite Dax and Sierra’s initial resistance, his wily charm relaxes her control-freak tendencies while her steadfast support bolsters his strength. Yet every new opponent places their newfound relationship under siege—one misstep, one wrong blow in the ring, and Dax could leave in a bodybag.