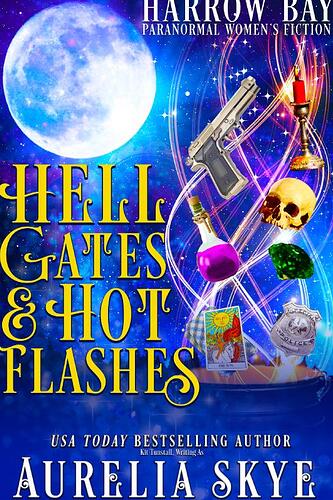 Welcome to the place where things that go bump in the night deliver your milk in the mornings, community is important to human and creature alike, and all Hell occasionally breaks loose.
When Jody Shaw is hired to be the new sheriff of Harrow Bay, a small coastal community, she’s excited to rise through the ranks and try something new. At forty-three, her career is everything that matters to her, besides her mother and grandmother, who move with her.

It doesn’t take long for Jody to learn Harrow Bay is unusual. It’s home to all sorts of supernatural creatures, and there’s a Hell gate right at the center of town. Seriously, who thought it was a good idea to build an entire town around a Hell gate?

As Willa, Jody’s mom, tries to figure out who she is now that she’s widowed, and Gram decides to wage war on the tyrant queen of the Senior Center, Jody realizes she’s not quite prepared for her new job when an escapee of Hell comes to Harrow Bay, with a handsome half-demon bounty hunter a