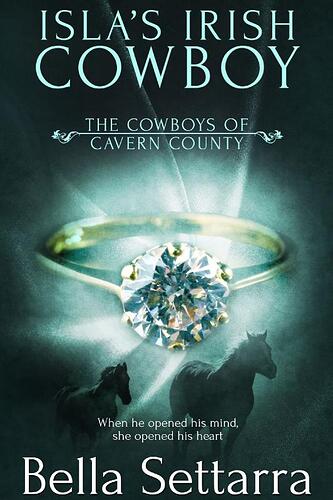 When he opened his mind, she opened his heart. Isla Gillingham is a beautiful, successful model, so she’s bound to be a spoiled, selfish diva, right? At least that’s what Kean Maguire presumes until he meets her. His impression changes in a heartbeat when he sees her dressed casually, eating fries, smiling and giggling.

Not one for socializing, Kean is secretly happy to volunteer to take Isla and the photographer into the mountains for a photo shoot until Isla’s manager, Tabitha Merchant, warns him that there is a powerful legal team ready to pounce the minute he slips up. A court battle will not only lose him his job, but also result in the closure of the Fielding Ranch.

Isla is immediately taken with the Irish cowboy and thrilled when he leads their trek into the mountains. His demeanor is anything but friendly, however, and even worse when an accident occurs on a narrow ledge.

Reluctantly, she allows Kean to offer her shelter at his cottage when the weather deteriorates. Given the chance to learn more about each other, can she persuade him that she is not the calculating bitch he assumes? And, is his heart really as cold as the ice outside or will it melt with the driven snow?

As Isla admits that her life isn’t quite as happy as it seems, Kean must disclose his unsavory past, despite knowing it could completely turn her against him. But their lives change entirely when they discover they are not the only ones keeping secrets.