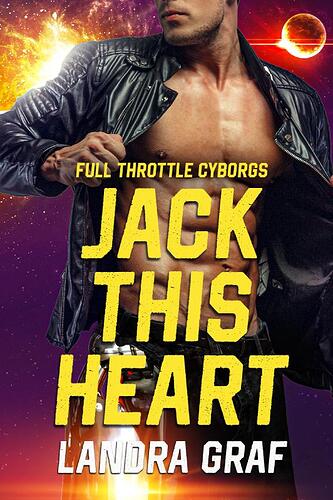 Love like you stole it. Jack Renfro lost his leg in a racing accident ten years ago. The cybernetic replacement he received from the moon techies has increased his strength, stamina and fortitude, making him prime for racing. But the racing dome doctor says Jack’s implants are poisoning his blood and his body. If he doesn’t get them fixed, racing will be the least of his worries.

Enter moon tech Shannon Moore, a survivor of the Humans First Terrorist cell purge. She’s known for her cybernetic work, but finds most racers and their philosophies disgusting. Especially since she was born on Mars and is spying on behalf of the Macintosh gang to pay off her betting debts.

Too bad close quarters make Shannon realize that she and Jack have a connection far deeper than simply saving Jack’s life, and his Full Throttle partners are supporting a town, not tearing it apart. When Shannon’s secret unravels, will the newfound relationship she and Jack have survive?