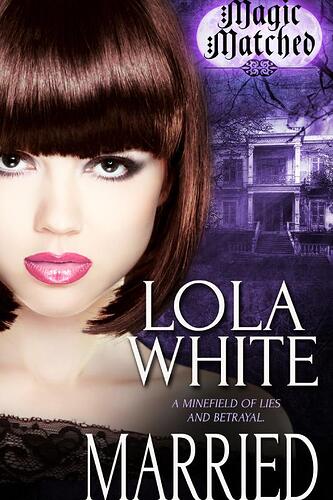 In witching society, magic and politics are the only things that matter, and marriages are arranged for advantage rather than love. Tulah Ngozi doesn’t want to go home, but she’s being forced to attend the wedding of the man who killed her father years ago. The Ngozi men are determined to use her in their plots against each other, but she takes her future into her own hands when she learns that Adam Davenold will also be in attendance. Adam is a powerful man in a matriarchal Family, used to being seduced by women looking to gain power. He’s good at guarding his heart—until he meets Tulah.

Diplomacy demands that the Davenolds attend the wedding and, in the company of their Matriarch, Adam and Georgeanne travel to the Ngozi residence, where they become embroiled in a frightening power struggle. Georgeanne is grateful for the unexpected presence of her betrothed, Silviu, who arrives uninvited after he learns she will be there. When the groom proves disturbing and the Davenold Mother falls to a suspicious illness, Silviu’s magic is the only thing Georgie can depend on for support.

In witching society, magic and politics are the only things that matter, and marriages are arranged for advantage rather than love. But more than politics is at stake in a minefield of lies and betrayal. Death and dark magic stalk the Ngozi–Levy wedding, and only Silviu and Georgeanne’s Matched magic has a chance of getting everyone out alive.