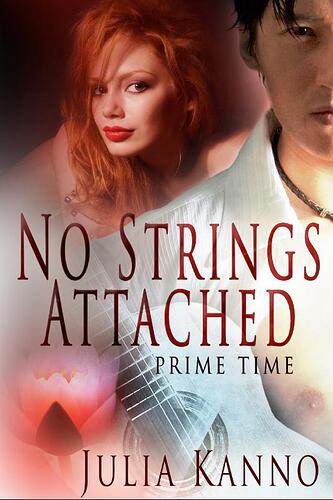 She’s a puppet on a string—a guitar string, that is. Divorce, great credit interest rates, and cereal box contests—some things just aren’t supposed to happen. So why Stephanie Spiegel is standing in the middle of a rock concert, suffering the stench of sweat and stepping in puddles of only God knows what is beyond her. But then, if ‘something’ hadn’t come up—as usual—her ex-husband Jacob would be doing the honour of escorting their teenage daughter, Amelia. The real mystery lies in how she’s going to continue to keep up the charade of emotional stability, but as fate would have it, as soon as she’s talked herself down from a mental ledge, she lays eyes on the lead guitarist for ‘Whatever They’re Called’.

Well, damn… There goes what little sanity she’s managed to hang on to. Having won backstage passes along with the tickets, Amelia and her friends all but drag Stephanie to meet the band. And, lo and behold, Ren is every mother’s worst nightmare—he’s a young, handsome, arrogant, talented, arrogant, witty, arrogant rock star.

Oh, and as if the man wasn’t infuriating enough, Stephanie can’t seem to keep her eyes off him long enough to walk without tripping. When she finds herself alone with him, sparks fly. And before she knows it, she’s entwined in his arms, feeling safe and desired for the first time in a very long time. She finds herself submitting to his every desire like a puppet on a string—a guitar string, that is.