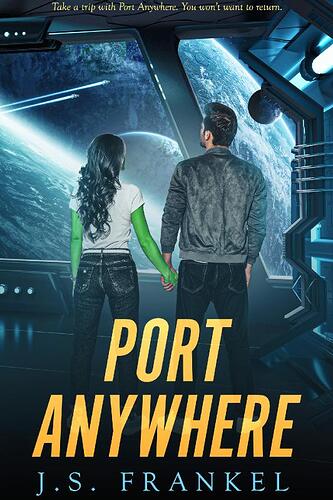 A restaurant in space, a waystation for all those who need a meal. When one of the guests turns out to be forbidden cargo, everything changes.

Rick Granger, seventeen, is the sole human occupant of Port Anywhere, a floating restaurant in space. His parents are dead, and he is aided by an alien called Nerfer—a pink alien that looks a lot like Spam. They journey throughout the galaxy, making a precarious living by offering meals in exchange for whatever their alien guests can pay.

As well, Port Anywhere, while powered by ion engines, has one unusual feature. It can suddenly jump from place to place, although Rick doesn’t know why. It simply happens.

His mundane existence changes when a warlike group of aliens led by a man named Kulida ask Rick to guard a possession of theirs. Upon further examination, Rick finds out that the cargo is a young alien woman named Merlynni from a planet called Kagekia, who carries a secret inside her—a mini galaxy.

The tiny galaxy was placed inside Merlynni by her father, a genius scientist, in order to hide it from hostile forces. As Port Anywhere continues its journey, Rick finds himself falling for Merlynni, and he will not give her up.

When Port Anywhere shifts to various galaxies with various aliens in pursuit, they manage to escape time and again, but there comes a time for the inevitable showdown, and Rick has to use all his wits in order to save Merlynni and solve the riddle of the power she carries inside her.