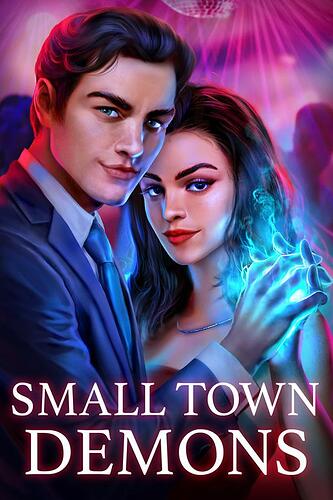 The good news: the ritual worked. The bad news: a demon’s living with you, and you have a year and a day before it takes you over.

All you and your friends wanted was some excitement in your small town for your final year before college. You never thought the ritual would actually work. But now you have a demon living in your body. When your time is up, will you exorcise the demon, befriend it, or take on its power – or succumb to it altogether? Will you still be human enough for a normal life, and do you even want to be?

This is one of my favorite stories and I think a hidden gem in our library. Can’t wait to read this for Book Club!

What did you think of the first chapter? How are you feeling about our friend Ignatius??

Okay, so I’m playing this for the second time, it’s been a while and I missed Ignatius’ wit. This time around, I wanted to pick different choices, and I immediately regretted it

This was my first oopsie

When I played for the first time it took me for ever to make a decision, and I did really well. Now I’m apparently on a destructive path

And oh man… it’s not going too great.

If you played, you know what it was and be horrified.

So yeah, it’s not going too well for me, but I hope I can turn things around. I thought that this time I might just go all in and for the “merge” - but idk… I’m scared lol…

Oh man, so I’m playing this for the second time, and wanted to try something different. Last time I played a bunch of episodes (all that were available at that point) but my progress reset a while ago, so I’m starting this one over. I was thinking about changing things up and just go wholeheartedly in with Ignatius, but I don’t think I have the guts

I think I’m gonna try the same way as the first time. Be careful, and finding a way out of this dilemma. But it’s like trying to trick the devil while at the same time using him… idk if I can pull it off!! What are YOU gonna do??

This story would be a whole lot better if everybody in town (more or less) didnt have magical powers. It felt a little too farfetched for my liking.

Oooh that’s definitely something to consider. Do you think it would have been received better if the story was advertised as being fantasy, or something similar? Or do you think that the current storyline would benefit from the tension of being the only magic user? Both is also optional

I think it would have been a lot better if Morgan was the only magical in town, but even then it would have felt clichéd that she wound up becoming the vessel for Ignatius. Maybe her powers could have manifested because of his influence on her mind and body instead.

Nice story, I especially like how there are so many options.

I like the storyline of the novel. It was exciting and suspenseful; one of the best part was that they were mystery that surrounded all the characters, like why was Morgan the one that freed Ignatius and not Blake who was part of a supernatural legacy or Anna who believes and practices the occult, was it because of her mother that just disappeared one day or was it because she resemble Elizabeth, it feels like the name was an important clue given and like why was Ignatius trapped, who exactly is he and why does Robert resembles himself, it’s like being given pieces of a puzzles that isn’t completed yet. I like how characters have their own backstory that makes them who they are, how Blake just want to be free from his family’s legacy, how Anna still hasn’t move on from the death of mother and just want to see her again and how Leander want to stop the magic or supernatural from hurting anyone ever again because of what he experienced. There was kind of a problem in Chapter 3 where Elliot just turned into pink, her character and background, when we’re not interacting with her but other than that I love the story.

Starting on this story and so far its got me hooked! Can’t wait to read the rest!

I love it because I can choose to be a Lesbian and not a boring straight???

When can we expect new cool charpters?