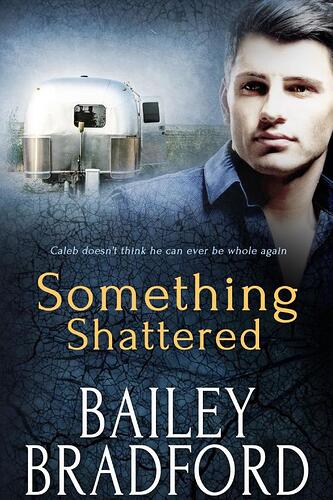 When something inside him is shattered by an act of violence, Caleb Tomas doesn’t think he can ever be whole again.

Police Officer Jesse Martin has lived in the small town of El Jardin, New Mexico, for a decade, but he’s never seen anything like the mysterious man who moves in in the middle of the night. The house across the street from Jesse’s trailer is no longer empty. There’s a puzzle waiting to be solved there in the form of one sexy, but decidedly different, man.

Bruised and battered inside and out, Caleb Tomas flees to the town of El Jardin in the hopes of escaping the terror that haunts him. Instead, he becomes more of a recluse, scared of everything, unable to get more than a dozen feet past his porch before he panics. His head’s a mess, and he knows he needs help, but that’s a step he doesn’t want to take. It’s easier, safer to stay hidden away with only his adorable puppy, Loopy, and the bird-murdering cat, Mix, for companionship.

But Caleb can’t help but notice the sexy man across the street, and when Loopy escapes from the back yard, it’s Jesse Martin who comes to the rescue.

And he might save more than one bouncy little poodle, if Caleb and Jesse are willing to take the risk.