Starting Over in Cedarwood (MeganSlayer) 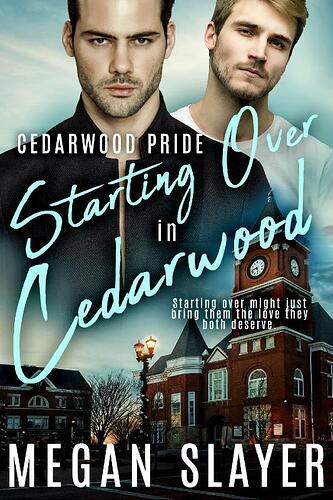 Starting over might just bring them the love they deserve. Shaun Fallows came to Cedarwood to start over. He wants to be done with dating, but the moment he sees Kevin, the sparks are off the charts. He can’t get the sexy man off his mind. So much for not wanting to get involved. Kevin is the man of his dreams. Can he convince Kevin to give him a try or will the romance end before it gets the chance to begin? Besides, there’s the small issue of Kevin’s cat…

Kevin Keiser did the dating thing and ended up burned. One of the few bright spots in his life is his cat, Leo. The animal might be a bit prickly, but he’s been a good meter for who Kevin should date and who he should avoid. He wants a boyfriend who isn’t put off by his pet. Shaun sure seems to fit the bill. Is he just another man or the love Kevin’s been waiting for?