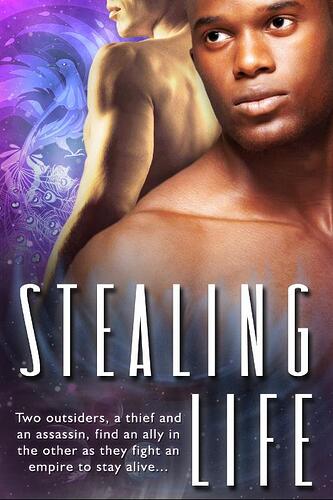 Two outsiders, a thief and an assassin, find an ally in the other as they fight an empire to stay alive. Rue Thaday accepts a job to steal some files for the Inter-Universal Military. When he comes face-to-face with his mark, Rue realizes there’s more going on than meets the eye. He might even have been set up to take the fall while the IUM forces another planet to accept their rule.

Vlatko’s trying to find a way to survive. When Rue arrives in his life, Vlatko knows the thief has ulterior motives, but he’s willing to risk everything for a taste of Rue’s lips.

Together, they have to find a way to keep Vlatko alive, and not allow the IUM to win the very dangerous power play they’re caught up in. That might be the easy part, considering all the trouble appearing from Rue’s unknown past, along with the assassins who want to kill Vlatko.