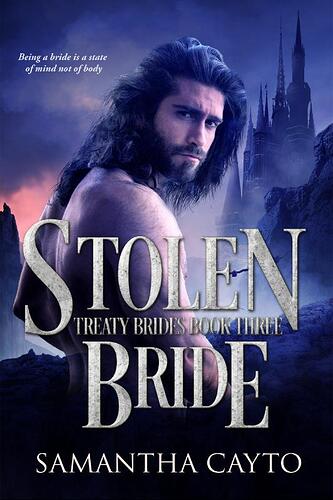 Being a bride is a state of mind, not of body. Prince Ronan of Moorcondia knows he is one of the luckiest boys alive. As the king’s second son, he has status and wealth without the heavy weight of the crown. Every man admires his hedonistic ways, but his behavior masks a shame that he feels. What he really desires is a quiet life with a man whom he can love.

Jarl Tarben is on a mission to save his people from starvation. Efforts to forge a treaty with Moorcondia have come to naught. In a desperate bid, Tarben has been tasked with abducting Ronan and forcing him into marriage. As distasteful and dishonorable as the scheme is, duty demands that he obey. He refuses to bed the prince by force, however, leaving it Ronan’s choice.

Ronan vows not to succumb to the temptation that Tarben presents. Pride alone dictates that he remain chaste, even as he grows closer to the barbarian. Tarben is everything Ronan ever dreamed of, and the lure of him grows stronger with each day that politics keeps them together.

When unseen forces threaten to consume them both, they must put aside pride and join forces to protect both their peoples.