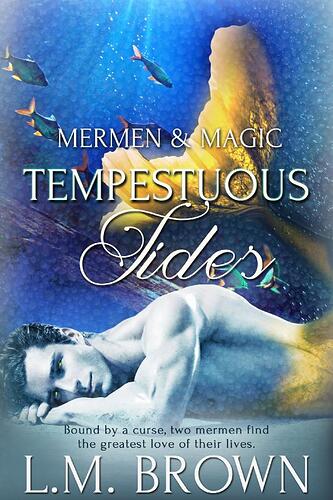 Bound by a curse, two mermen find the greatest love of their lives, but can they keep it? Justin is a merman who has been raised on land. He hates his fins and wants nothing to do with his heritage.

Lucas is an ambitious merman who has lived his whole life in Atlantis. He has spent his adulthood hiding his sexuality because homosexual relationships are forbidden in the underwater city. Now he has been sent on a mission by King Nereus to locate his oldest son and bring him back to Atlantis to take his place as the heir to the throne.

Although his mission seems impossible, Lucas finds help from the Atlantean Goddess of Love, little knowing that she has her own reasons for bringing Lucas and Justin together.

Justin is no stranger to immortals, having been raised by two of them, but he has no idea of the consequences of angering the Goddess of Love. When he insults her, she curses him to find love only to lose it forever shortly after. As the love ‘em and leave ‘em type, Justin isn’t overly concerned, at least until Lucas enters his life and he sees how the curse will end.

Together they could have the greatest love of their lives, but only if they can appease the furious goddess before their time runs out.