The Real Me (MeganSlayer) 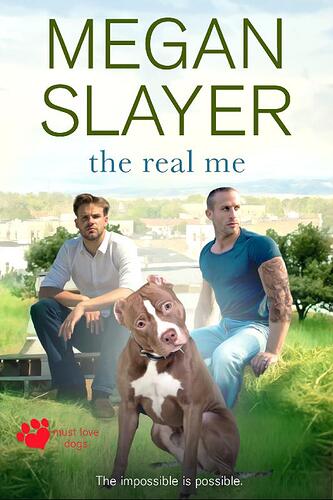 Taylor Fyre never thought he’d find love at the dog park, but when he spots Nicky Campbell and his dog, Nagy, he begins to think the impossible is possible.

Taylor Fyre isn’t wild about dogs. He’s got serious reservations about the animals and the last thing he wants to do is cover a story about the dog park. When he arrives at the park, he realizes facing his fears won’t be easy, but if Nicky Campbell is part of the healing process, he’s ready to start. The handsome, tattooed mechanic makes him want to bare his soul. But Nicky’s got a dog and things could get sticky.

Nicky Campbell would rather keep to himself than talk to new people. He’s tired of being labeled dangerous because of his tattoos. His dog, Nagy, a pit bull mix, faces the same discrimination. When Nicky runs into Taylor at the dog park, he expects a fight. But the more they talk, the more he’s drawn to the polished reporter. If he and Taylor can overcome their differences and be themselves, they might find they have plenty in common and can have the forever they both deserve.