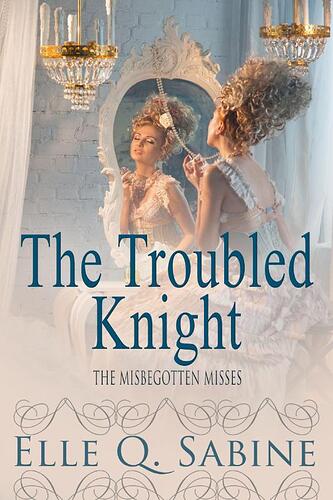 Sir Peter Devon spends his nights fleecing London’s young bucks, but when Fate traps him in her delicious coils, he must surrender or flee.

Sir Peter Devon inherited a baronetcy, survived a war, was knighted and spent too much time fleecing London’s naive rich. Gambling was—his mother often said—an immature way to spend the dark hours he spent awake, but he was unsuited to the normal life of a rich gentlemen. But Fate, in the form of friendly fire, trapped him anyway.

In his attempt to rescue a young girl from a corrupt and immoral ex-officer, he found himself engaged and quickly married to the chit. Abandoning her to the chaperonage of his mother was straightforward enough, but the girl didn’t stay young. Fate’s trap became a delicious torment. If he could only be certain that he wouldn’t lose his mind, he would want to keep her.

Genevieve, once an earl’s daughter but truly the bastard daughter of a duke and now a wife-in-name-only, is tired of waiting for Sir Peter Devon to see that she’s no longer sixteen. He’s watched over her, guarded her, supported her, appeared on command to escort her, called on her for twenty minutes at a time in his mother’s drawing room and even pandered to her desire to immerse herself in art and the country, when she believes he prefers the smoky gaming hells of London. Her hero has always been Sir Peter. He can be more than an absentee husband, and she doesn’t understand why he is so reticent when he clearly desires her. One way or another, they are together for life. Eventually he will let her be close to him. Won’t he?