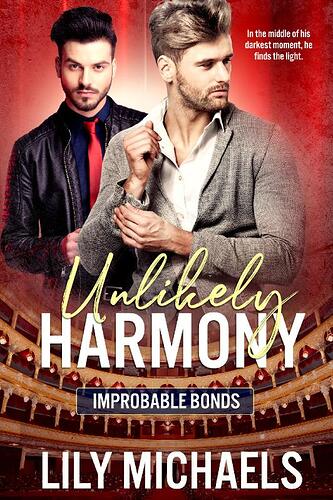 In the middle of his darkest moment, Sebastian finds an unexpected light.

Since his immense gift was first discovered, Sebastian Chevalier has led a life of blissful indulgence—crisscrossing the globe to perform to thousands of adoring fans and garnering international attention for putting a modern face on opera—that is until a vocal cord injury steals Sebastian’s most prized possession.

While he rehabilitates, he turns his focus to composing an opera and hires Jasper Lorde to join as his accompanist to help turn his written music into a living creation. Although Jasper is the polar opposite of everything he is normally attracted to, Sebastian finds himself with an overwhelming desire for the man and as he slowly regains his ability to speak, the two men explore the passion building between them.

Once the opera is complete and Sebastian has been cleared to sing, he books a debut at the prestigious LA Opera House. But this decision releases a Pandora’s box of demons for Jasper that threatens their tentative connection.