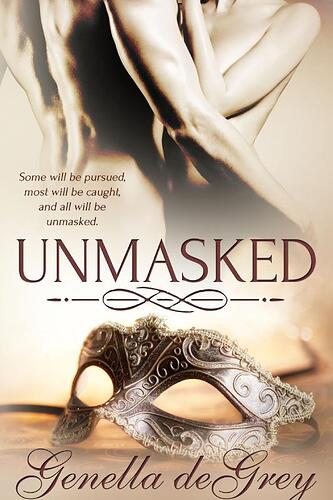 Some will be pursued, most will be caught, and all will be unmasked…

Venice, Italy, 1795—Gwendolyn Rawleigh has done something she should be ashamed of, but is confident that all repercussions will be avoided—if her companions keep the scandal to themselves. After all, she took this holiday not only to elude the infamous marriage mart, but to have a chance at making her own match, too. Her confidence shines brightly, but her lack of experience could send her headlong into the dark sensual autonomy of Carnival.

Ellie Appleton innocently watches Gwennie charm her way around the Venetian ballroom, longing to be as poised and elegant as her best friend. But in the darkness of her room she hungers for the touch of a man’s hands, to feel his lips on hers and to explore the forbidden secrets of her own wicked fantasies.

After finding out that his sister lied about procuring a proper chaperone, Weston Rawleigh, Gwendolyn’s twin brother, is obligated to stand in as escort for his sister and her best friend. Pity that his chances of finding a bit of sport on this trip have been considerably lessened, which is a shame as Venice is famous for its accomplished courtesans and his usual tastes lean toward the sexually experienced. Most unexpectedly, he begins to find Ellie’s artlessness more than intriguing—even though he wrestles with his conscience about it at every turn.

Marcello Verdante’s enemies have chased him out of Florence, threatening that if he attempts to remain in Italy and petition his claim for the Medici fortune, he will be killed. But when Gwendolyn Rawleigh turns his head while he hides out during Carnival, he can’t keep his eyes—or his hands—off of her.