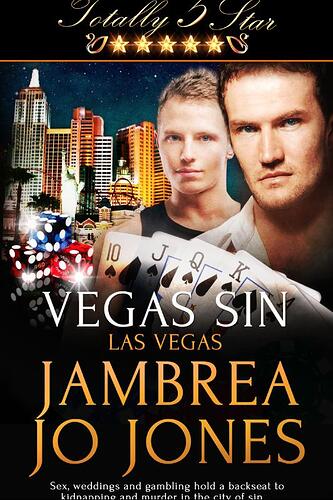 Sex, weddings and gambling hold a back seat to kidnapping and murder in the city of sin…

Owen Carpenter sets aside one night each month to relax at the Totally Five Star, but a case has just landed on his desk that has those nights disappearing for the foreseeable future. Someone is kidnapping women in Las Vegas and Owen needs to stop them before the women end up dead.

Harrison Boone is head of security at the Totally Five Star. He notices a man who comes in once a month and he wants to know more about him. When Owen introduces himself, there’s an instant attraction between Harrison and Owen, but they are interrupted by a kidnapping—at his hotel. After Harrison leaves the military, the hotel becomes his life, so Harrison will do anything to keep the hotel out of the news and protect its reputation.

Can Owen and Harrison find love in Sin City, or will the case of the disappearing women crush what might be the best bet the men have ever placed?