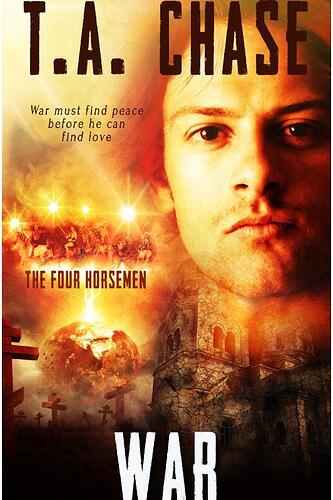 Fighting the battle in his own heart, War must find peace before he can find love.

War destroyed an entire tribe of innocent people when he was human, all because his best friend lied to him. His guilt brings him a destiny he never planned. As the Red Horseman, War spends the centuries creating battles and wars between countries to restore balance in the world. While he accepts the job to atone for his sins, he wishes he didn’t cause men to kill each other. War lives a solitary life, without hope of ever finding forgiveness.

From the mountains of Afghanistan to the plains of Kansas, and to the steppes of Mongolia, Russell Heinz searches for peace. He’s battling survivor’s guilt after having two members of his army unit die within feet of him. His own mind shuts down, and Russell spends time in a mental ward, dreaming of a man with blood-red hair and all-black eyes. Unsure if the man is real or just a figment of his wounded mind, Russell heads to Mongolia, looking for forgiveness of his own.

Separately, Russell and War fight their own personal demons. Together, they find peace in a love tested by the fires of battle.